Dolphin’s Of Hollywood is an american entertainment company consisting of a record label, theatre production as well as film, television and books. With deep roots in American history DOH continues to produce original works and opens itself to new opportunities in all aspects of entertainment.

The History of Dolphin’s of Hollywood

The legendary John Dolphin, also known as Lovin’ John, was one of the first and most well respected, black business man who made his way in the music business of Los Angeles in the 1940s and 50s. An independent record label owner and R&B producer, his contributions to the formative years of Rock & Roll are often overlooked. Dolphin entered the Los Angeles music scene as a retailer where in 1948, when he opened Dolphin’s of Hollywood, a record shop near the corner of Central Ave & Vernon Avenue. A mini-mogul who had almost every facet of the record business covered, was taking storm of this segregated town and bringing people of all colors together through music.

The creator and innovator of the crossover music concept he knew white teenagers loved black music. He went on white radio station KRKD and played a black music format, marketing black music to whites. White kids would pack the Dolphin’s of Hollywood record shop in the all black neighborhood of South Central Los Angeles, nightly. Dolphin hired the most deejays including famous Dick “Huggy Boy” Hugg, who drew white teenagers to the shop in ever increasing numbers. Dolphin’s of Hollywood radio show featuring Huggy Boy as deejay was the first to play and break the song “Earth Angel” by the Penguins and within weeks of its release it shot to the top of the charts.

His contributions to music spans from Jazz to Rock’n’Roll, the many great artist who’s careers he help are astonishing, artist such as Sam Cooke, Jesse Belvin, Charles Mingus, Pee Wee Crayton, Major Lance and many more. The Dolphins of Hollywood legendary DJs in the store window like Huggy Boy, Hunter Hancock, Charles Trammel, spinning records all nights. Read and discover his contributions goes beyond music, his record shop and radio show would bring together all races during a time of segregation, his protest against LAPD harassment of black business. An incredible never told story of John Dolphin’s life journey to the day of his murder in 1958. A great tale of American history, African American history, Music history, and Los Angeles history all in this one story. 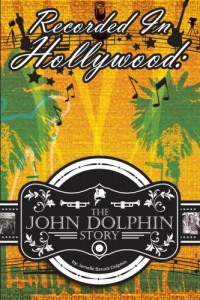